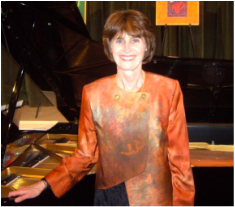 Colleen Athparia, an internationally recognized pianist, has made a career for herself as both a solo and chamber musician, a reputable teacher and as a recording artist with eight CDs to her name. A member of MRU Conservatory Faculty since 1981, she has toured as a performer and guest instructor from Mexico to Taiwan, Russia, Israel and the Far East. In 2010, Ms. Athparia performed in recitals with flutists William Bennett, Lorna McGhee and Susan Hoeppner. Her background includes a Master of Music degree with distinction from Indiana University, studying under the legendary pedagogue G.Sebok, as well as receiving the gold medal and placing first in the Canadian Music Competition as a student of Margaret Parsons-Poole.

As an experienced teacher, she has adjudicated festivals in Western Canada including the BC Provincial Finals. Colleen has also been a Senior Examiner for the Royal Conservatory of Music since 1980 and has three former students who are now also examiners. She has been a consultant for the new RCM Licentiate Piano Syllabus and is also co-author of the book, Impressionism: A Resouce Guide, and Music Consultant for Adopt a Competitor Program through the Honens International Piano Competition Foundation. Colleen travels extensively to give workshops on such topics as “Creative Practising”, “The Art of Polishing”, “Creative Technique”, and “Transforming the Mundane into Magic”.

Her studio in Calgary features some extremely talented students who have won national and international competitions, but most importantly who love music!

Often a guest on CBC radio, she has also been heralded by the National Post as one of the top five Canadian pianists of contemporary music today. In November 2009 Colleen was honoured in Ottawa as one of the top 50 musicians who have contributed significantly to the Canadian music scene.