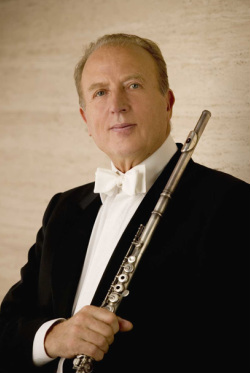 One of the foremost musical artists performing today, William Bennett has raised the profile of the flute to that of an instrument capable of a wide range of tonal colours, dynamics, and expression, giving it the depth, dignity, and grandeur of the voice or a string instrument.

He studied in London with Geoffrey Gilbert, and in France with Jean-Pierre Rampal and Marcel Moyse.

He has been principal flute in many orchestras including the London Symphony, the Academy of St Martin in the Fields, and the English Chamber Orchestra.

The Master classes of Marcel Moyse in Switzerland in the late 70's provided extra stimulus and inspiration so that, in tandem with William Bennett's burgeoning career developed as an International soloist and recording artist Partnerships with Clifford Benson (piano) and George Malcolm (harpsichord) and solo recordings with Yehudi Menuhin, the Grumiaux Trio, I Musici, the Academy of St. Martin in the Fields, and the English Chamber Orchestra have received international acclaim and enthusiastic reviews in record and CD journals.

Early in his career he made the first English recording of the complete Handel Flute Sonatas, and of contemporary works including the Sonatine of Boulez, Berio's Sequenza, Messaien's Merle Noir, and Richard Rodney Bennett's "Winter Music" (written for him).

In addition to recording the standard flute repertoire of Bach, Handel, Vivaldi, Mozart, etc., he has made pioneer recordings of many neglected 19th century works, such as music by Ries, Romberg, and Taffanel. He has recorded with artists such as Jimi Hendrix and Wynton Marsalis. He has made over 90 CD's as a soloist.

This year his Concert engagement take him to U.S.A (February, May, June), Switzerland, Japan, Venezuela.China/Taiwan etc. and he is going to record several contemporary Flute Concertos with English Chamber Orchestra and two CDs with pianist Clifford Benson.

In January 1995 H.M. The Queen presented William Bennett with the Most Excellent Order of the British Empire (O.B.E) for his distinguished Services to Music.

In 2002 he was awarded the National Flute Association's "Lifetime Achievement Award" and in 2003 he was appointed the British Flute Society's "Flautist Laureate".